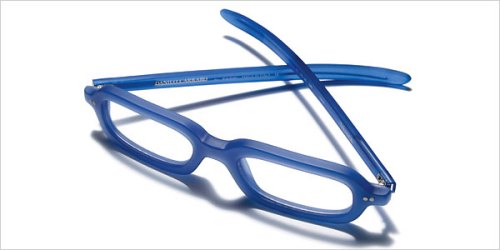 Since they’re the only thing about him remotely clichéd, it’s impossible not to grant the 33-year-old Spanish design hotshot Jaime Hayon his signature spectacles. In the tradition of luminaries like Philip Johnson and Daniel Libeskind, Hayon’s rubber azure frames have come to define his image — an appropriately hipper, quirkier one than his dark-rimmed elders.

His 2006 furniture collection for the Spanish manufacturer Bd Ediciones de Diseño — which included bulbous zoomorphic vases and the charming Multileg cabinet, its feet a stylistic hodgepodge — won him celebrity fans like Cindy Sherman as well as commissions from Moooi and Swarovski. And Lladró has now hired him as creative director to overhaul its fusty reputation.

Hayon’s glasses, made by the Venetian firm Ottica Carraro, serve to remind him of a time before anyone knew his name. He discovered them in 2003, during his tenure at Benetton’s Fabrica research institute just outside of Treviso, his first serious job out of school. “I adore Venice and went there often at the time,” he recalls. “I found Carraro and absolutely fell in love with their use of shape and materials.”

The Carraro boutique is located off the Piazza San Marco in the same space it has occupied since 1967. “The people there are great, and the glasses are handmade by artisans without any toxic components,” Hayon explains. In the end, however, it was the frames’ whimsical hue that really spoke to the designer, who has appeared in publicity photos dressed as Pierrot and as a pink bunny. “I think they suit me well,” he says.

This entry was posted in Design, People. Bookmark the permalink.