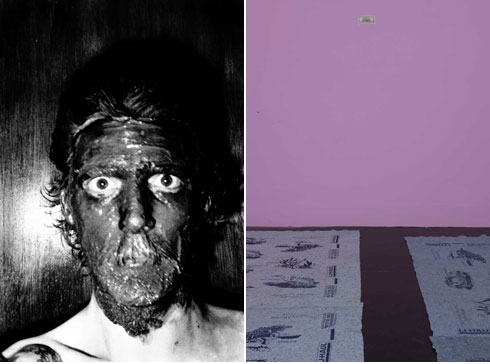 In the last few years, Minneapolis has becomes a mini-mecca for art and architecture with Herzog and de Meuron’s addition to the Walker Art Center and the Guthrie Theater, designed by Jean Nouvel. So it seems appropriate that the Los Angeles gallery Peres Projects would pay homage to this Midwestern culture capital with the group show “Minneapolis,” which opened last week. But Richard Lidinsky, the exhibition’s organizer, cites not starchitects and experimental art but rather the city’s “high rate of literacy and racially tolerant atmosphere” as key inspirations. Wait, what?

It turns out Lidinsky randomly yanked these stats from Wikipedia — he’s never been to Minneapolis, nor, presumably, have many of the gallery’s artists, which include Dan Colen, Terence Koh, Dash Snow and Assume Vivid Astro Focus. “All I really know about Minneapolis is Prince,” Lidinsky says. And since the Minneapolis-born pop star is currently the subject of the gallery’s in-house magazine, Daddy, voila! — a spinoff for a summer show that defies all logic, gathering together random pieces like Mark Titchner’s 2004 H-bomb mosaic and Koh’s 2008 neon “Bang Bang Bar.” Some of the work refers to the color purple or life in the Midwest, and one artist, Dan Attoe, is actually from Minneapolis, but that’s the extent of it.

It’s not the first time Javier Peres and crew have toyed with the convention of the summer group show. In 2006, “Mangoes” called upon the tropical fruit as a loose metaphor for how good the selected works would “taste together” despite having no curatorial relationship whatsoever. The gallery has taken a similarly abstract approach when it comes to Minneapolis; as Lidinsky admits, “we have more questions than answers.”

CLICK HERE TO VIEW THE ORIGINAL STORY AT THE MOMENT

This entry was posted in Art. Bookmark the permalink.