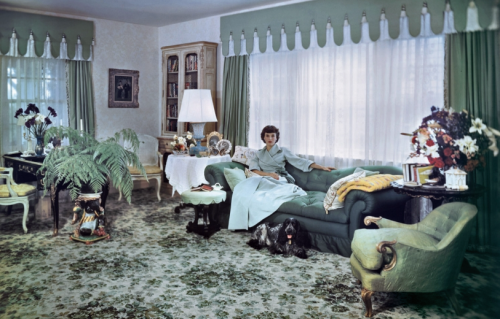 When Billy Baldwin famously helped Diana Vreeland turn her 1950s Park Avenue apartment into what she cheekily called a “garden in hell,” he borrowed many of the furnishings and ideas from the home that George Stacey had designed for Vreeland 20 years earlier. Stacey’s list of clients included every society name from Babe Paley to Grace Kelly, yet while Baldwin would go on to be immortalized as the “dean” of 20th- century American decorating, Stacey, who possessed neither Baldwin’s outgoing personality nor his legacy-preserving biographies, faded into obscurity. The release of Maureen Footer’s George Stacey and the Creation of American Chic (Rizzoli), the first book devoted to Stacey and his undisputed influence, should help remedy that.

Stacey’s decorating career took off in the 1930s, when for a while “almost every issue of Vogue featured some gorgeous socialite whose living room he’d designed,” Footer writes. He’d spent the previous decade dealing antiques in Paris and returned to New York to find an upper class that was better-traveled and more open-minded than when he’d left; the newer generation, Footer suggests, was tired of living in period sets. “They wanted something forward-looking and independent.” Born and raised in Connecticut, Stacey had the perfect balance of deference and daring to satisfy such clients as the ’30s It girl Frances Cheney, who let him fill the house she’d commissioned on her family’s Long Island, New York, estate with Venetian mirrors, contemporary rugs, 18th-century andirons, and lavish Steuben-crystal beds.

Stacey built a reputation for studied eclecticism and tasteful rule-breaking, boldly stationing two dime-store picnic chairs in the middle of Vreeland’s living room, for instance. But he built his business on the strength of his relationships with some of the era’s most high-profile women, such as Lil Isles, Brenda Frazier, and Vincent Astor’s wife, Minnie Cushing, who passed his name on to her sisters, Betsey Roosevelt Whitney and Babe Paley. He forged such a “profound connection” with Paley, Footer says, that he would take her on antiquing trips whenever she hit a rough patch in her marriage. Stacey’s circle “so glittered…with glamour girls and power brokers” that even Baldwin viewed him as New York’s “reigning king of design.”

By the time Stacey retired, in the ’70s, Princess Grace of Monaco and Ava Gardner had also become clients, though his irreverent streak had grown substantially tamer. This allowed him to land jobs like the conservatory of the Palais Princier de Monaco and Gardner’s Madrid apartment, which he designed, writes Footer, “with grandeur and restraint worthy of the Hapsburgs” at a time when “younger decorators flirted with Lucite, paisley, conversation pits, and hanging basket chairs.” Still, Stacey proved an inspiration to interior designers like Albert Hadley, Sister Parish, and Michael Taylor. “Stacey took this hidebound, self-conscious approach to design into a breezy chic that was very independent,” says Footer, who believes his work to be more relevant now than ever. “We’re in a moment where everyone wants personal design that’s unlike anyone else’s. Stacey is the one who made that possible.”

This entry was posted in Design, People. Bookmark the permalink.