Before Christina Vantzou, a Kansas City, Mo.-born art student, fell in love with an American expat during a layover in Brussels seven years ago, she had never given the city a second thought. She assumed it was as bland as everyone said, and when she packed her bags and moved there soon after, she found plenty of Europeans who agreed. “The people I was hanging out with at the time referred to it as the Mexico of Europe,” she says. “Everyone wanted to go to Paris or London or Amsterdam, and Brussels was just this weird place in the middle.” At first, Vantzou stayed mostly for her relationship and for the hefty artist’s stipend she received from the Belgian government, having secured E.U. citizenship by way of her Greek father. But then a funny thing happened. END_OF_DOCUMENT_TOKEN_TO_BE_REPLACED

It’s not as though anyone in Berlin really needed proof, last week, that the city’s once-hip central Mitte neighborhood had officially jumped the shark — two years’ worth of boutique hotel and Mavi-store openings, plus skyrocketing rents and a mass exodus of the gallery scene, had all been fairly obvious clues. But as the local fashion crowd milled around on Wednesday night outside the opening of Andreas Murkudis’s sprawling concept shop, newly and thrillingly relocated to a remote stretch of Potsdamer Strasse once ruled by drug dealers and prostitutes, there seemed to be only one sentiment on everybody’s lips: Goodbye, and good riddance.

END_OF_DOCUMENT_TOKEN_TO_BE_REPLACED

Comments Off on Big in Berlin, The Moment, June 2011 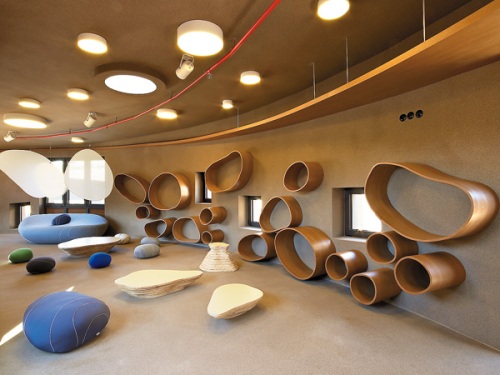 Yank a youngster away from his parents, and you’re asking for trouble. But lure him into a pint-size make-believe world, where every detail is attuned to the experience of childhood, and he’ll almost always go willingly-a particularly useful strategy if said parents are paying good money to be tempo­rarily divested of him. For Navarino Dunes, Costa Navarino, a Starwood Hotels and Resorts Worldwide property on the south­western coast of Greece, Polyanna Paraskeva + Associates was commissioned to design two children’s camps that could promise guests both happy offspring and coveted alone-time. END_OF_DOCUMENT_TOKEN_TO_BE_REPLACED

They Must Be Giants, T Travel Winter 2010

‘If you think big,’’ says the tag line for the 1,000-acre Baha Mar resort about to break ground in the Bahamas, ‘‘think bigger.’’ Sound ridiculous in a recession? It’s more of a harbinger than you’d imagine, at least in the travel world: led by Las Vegas’s CityCenter and the Marina Bay Sands Singapore, a new wave of mega-scale complexes that were conceived during the boom have recently opened their doors, with several more in development, from the Alps to Abu Dhabi. ‘‘I think it’s the future,’’ says Andy Cohen, executive director of the architecture firm Gensler, which worked on CityCenter and has a similar mixed-use project brewing in Shanghai. ‘‘Whether it’s sports, entertainment or retail, the ability to have all that variety in one place is key. People want choice.’’ END_OF_DOCUMENT_TOKEN_TO_BE_REPLACED

Comments Off on They Must Be Giants, T Travel Winter 2010

Berlin is electric. Two decades after the fall of the Wall, its aftershocks still reverberate through every avant-garde gallery and underground club. While the ghosts of Hitler and Stalin linger in the city’s architectural bones, Berlin’s young generation has chosen to transform the past into something liberating. Everywhere, particularly in the fashionable Mitte district, former fortresses to fascism now shelter art galleries, museums and bars. END_OF_DOCUMENT_TOKEN_TO_BE_REPLACED

When David Lynch and Frank Gehry made headlines last year for their involvement in two multimillion-dollar cultural centers in the economically downtrodden city of Lodz, Poland, confusion ran high. What could they possibly see in the so-called Manchester of Poland? In fact, Lodz is undergoing something of a creative rebirth. The city has begun turning its 19th-century textile buildings into new-economy hubs — a case in point is the Manufaktura complex (Ogrodowa Street), home to a museum and the city’s first upscale design hotel, Andel’s. Lodz is also financing cultural festivals and programs aimed at retaining local art school grads, and once a planned high-speed rail slashes the Warsaw commute to 35 minutes, they’ll have one more reason to stay put.
END_OF_DOCUMENT_TOKEN_TO_BE_REPLACED

WHAT’S NEU? In Vienna’s cobblestoned city center, where horse carriages amble by and street signs are printed in Gothic type, bygone artisans still flourish: some of the most beautiful storefronts belong to tailors and shoemakers that have been there for generations. And yet, with Helmut Lang and Raf Simons having done turns teaching at the city’s fashion school, a nascent contemporary men’s-wear scene has emerged, making no Viennese shopping expedition complete without experiencing old and new… END_OF_DOCUMENT_TOKEN_TO_BE_REPLACED

In the 1990s, boutiques and bars popped up between the Latino watering holes in San Francisco’s Mission District. Now the neighborhood is experiencing another surge, as a handful of Italian restaurants are bringing culinary sophistication to an area known more for burritos as big as your head… END_OF_DOCUMENT_TOKEN_TO_BE_REPLACED

The opening of Bernard Tschumi’s glass-and-concrete New Acropolis Museum this summer was symbolic: a city known for its obsession with looking backward had finally resolved to carve a place for itself in contemporary culture. Of course, those in the know have been tracking Athens’s creative ascent for years now — with its growing reputation as an emerging art hub and a design community that’s increasingly pushing boundaries, Greece’s capital has more to offer than ancient ruins. END_OF_DOCUMENT_TOKEN_TO_BE_REPLACED

THE BUZZ With Serbia’s economy in turnaround, Belgrade’s cool factor is on the rise. The culturati who used to flee westward for work are staying around or returning to open boutiques, restaurants and design studios. END_OF_DOCUMENT_TOKEN_TO_BE_REPLACED